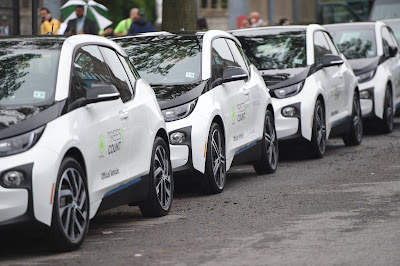 Buyers of electric cars would receive a subsidy from the government, the newspaper said, giving no further details.

Gabriel also wants to expand charging stations and encourage federal offices to use electric cars – an initiative that will be funded under the current German budget without tax increases, he said.

The German government aims to put one million electric cars on the roads by 2020. Among the country’s carmakers, BMW, Mercedes and Volkswagen now produce all-electric cars; Audi and Porsche have plans to build one.

Calls for supporting electric cars grew at the end of last year after the Volkswagen emissions scandal. Both Gabriel and his fellow Social Democrat Environment Minster Barbara Hendricks have called for a quota for electric cars.

Uber inches closer to its dream of electric flying machines

Uber has lofty dreams. The ride-hailing company is looking to expand beyond the confines of ground-based transportation and bring its passengers into the sky. It plans to do so with electric flying vehicles that will […]

Porsche will spend about 1 billion euros ($ 1.09 billion) on production facilities at its biggest plant to make its first-ever all-electric sports car. The Volkswagen-owned manufacturer will create more than 1,000 new jobs at […]

Poland-based Varsovia Motor Company unveiled a futuristic three-seat concept for a range-extended luxury sedan. Designed by the Kadler design studio situated, Varsovia (named after Polish capital Warsaw), was designed with a minimalist ethos and a focus on health. […]