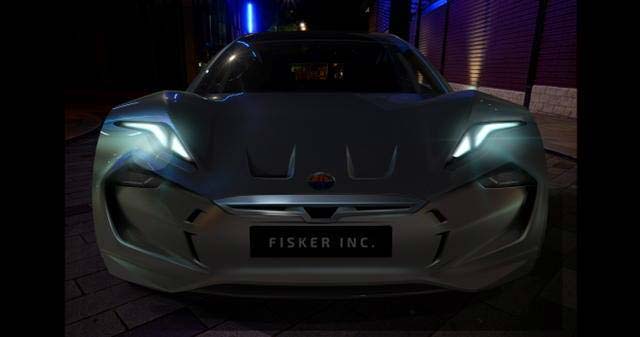 Henrik Fisker released another image of his upcoming electric car, after the first image revealed the model’s double butterfly doors.

The new Fisker front-end shows an aerodynamic low front with small trapezoid center radar & camera sensor combination, which Fisker says is designed to be used for safety features. Besides the grille-less front-end, the car also has adaptive LED front lighting.

The vehicle will feature a unique composite, carbon fiber and aluminum structure. According to FIsker, due to the car’s innovative structure and proportion, it will boast a larger interior than its closest competitor, with an engaging user experience that brings technology and streaming content into a simple logical order.

Fisker said he is planning to use new battery technology being developed by his battery division, Fisker Nanotech, to achieve a 400+ mile range.

Fisker is currently producing his supercar, the Force 1, through VLF Automotive. He is best known as the automotive designer behind iconic cars like the BMW Z8 and the Aston Martin DB9.

Fisker was the force behind a luxury hybrid called the Karma, which had a host of battery issues. Fisker’s company behind the Karma, Fisker Automotive, went bankrupt in 2011.

Liechtenstein-based electric vehicle startup nanoFlowcell has teased its latest creation, the QUANT 48VOLT, ahead of its public debut at the 2017 Geneva Motor Show next month. The QUANT 48VOLT features for the first time the new nanoFlowcell 48VOLT low-voltage drive […]