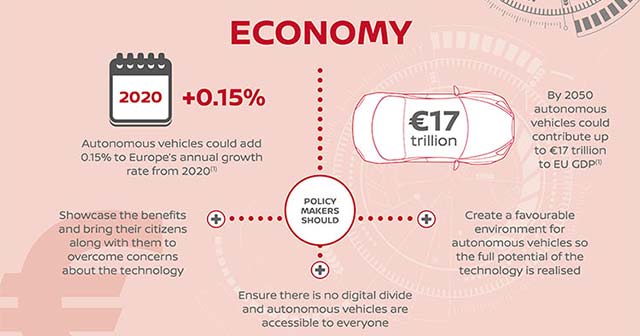 The real financial and social impact of autonomous driving vehicles on European roads has been revealed for the first time, as Nissan unveils one of the most comprehensive studies ever compiled on the subject.

Freeing the Road: Shaping the future for autonomous drive vehicles is an independent report by think tank Policy Network. It was commissioned by Nissan Europe to analyse both the social and economic opportunities offered by autonomous drive technologies. The report also highlights the key steps that need to be taken by governments and regulators to overcome technological and social challenges of autonomous drive. Focusing on Germany, Spain and the UK – the report highlights crucial features of the policy debate around autonomous vehicles and assesses the likely economic impact for the region as a whole.

The new independent economic analysis shows that autonomous vehicles will start adding 0.15 percent to Europe’s annual growth rate in the decades to come. As a result, the European (EU-28) gross domestic product will, cumulatively, be 5.3 percent higher in the year 2050 than currently, by which time autonomous vehicles will have contributed a total of €17tn to GDP.

Supporting this independent report is a comprehensive pan-European consumer study which has identified what people see as the main benefits of autonomous driving.

– More than half (52 percent) of respondents say that the biggest positive impact on society would be a reduction in accidents caused by human error, followed by removing unsafe/poor drivers from the road (43 percent)

– Four out of five respondents (81 percent) claim to have multi-tasked while driving. Therefore, it is unsurprising that the main lifestyle benefit of autonomous cars is the ability to do something other than driving when in the car (50 percent)