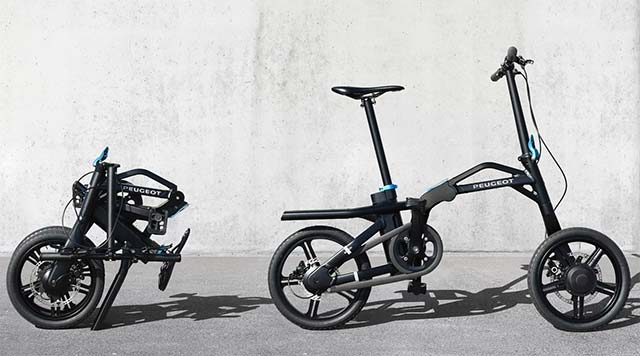 The eF01 offers an easy, smooth and active user experience for multimodal travel thanks to an innovative folding mechanism designed by Peugeot Design Lab.  Folding and unfolding the bicycle in less than ten seconds is mere child’s play: riders simply have to perform three steps in any order to alternate between riding, walking taking the train or metro.

PEUGEOT designed the eF01 for customers looking for mobility solutions to complement their vehicle. Thanks to the Dockstation, the eF01 can be stored and recharged in the boot of the new PEUGEOT 5008 SUV or any other vehicle with a 12-volt outlet. The battery recharges within approximately two hours whilst driving and can also be plugged into a regular outlet.

Compact, powerful and reliable, the eF01 weighs 17 kg, can reach a speed of 20 km/h and has a lithium-ion battery for a range of up to 30 kilometres. Disc brakes on the 16-inch front and rear wheels ensure optimum performance.

Connected, the eF01 uses the Bluetooth Low Energy protocol to communicate with a smartphone. Mypeugeot APP can be used to view the current range and battery level.

PEUGEOT has been a leading brand of folding bikes, from the production of the first folding bicycle designed for the French army by Captain Henri GERARD in 1892, and with the iconic PEUGEOT folding bikes of the 1970s.

Presented at the 2016 Paris Motor Show, the eF01 will be sold in the PEUGEOT and CYCLEUROPE networks starting in the first half of 2017.

Samsung SDI is joining the rush of battery manufacturers into energy storage systems. At Intersolar Europe 2015 in Munich, Germany, Samsung SDI unveiled a new all-in-one residential ESS with 5.5 kWh and 8.0 kWh. Other […]