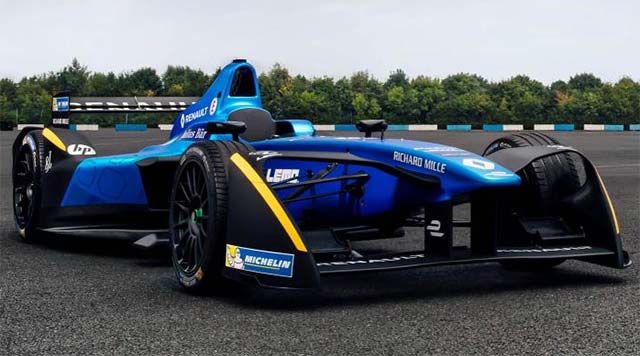 FIA Formula E Teams’ champion Renault e.dams revealed the dynamic new livery it will use to defend its team and driver crown in the 2016/17 championship.

The champions unveiled a livery featuring a vivid blue colour with flashes of bright yellow that will make the Renault Z.E.16 stand out from the Formula E pack.

The new livery is on display at the Renault stand in the Paris Motor Show, alongside the Renault Sport Formula One Team R.S.16 car that currently contests the FIA Formula One World Championship.

The new livery is branded with HP, which becomes the team’s new official technology partner from this season. As part of the partnership, HP will supply state-of-the-art PCs, tablets and plasma screens to the Renault e.dams team to aid race technical and sporting operations.

Richard Mille remains the team’s official partner for premium time pieces. Richard Mille’s success is founded upon three crucial elements: the best in technical innovation, the best of artistic and architectural features that contribute to the watch’s ergonomics, and the best of fine watchmaking’s heritage and culture. From the very inception of the brand, Richard Mille has endeavoured to apply to high quality watchmaking techniques and materials found in the most innovative sectors, from the domain of F1 racing car development to the aerospace industry, with the goal of creating an extreme timepiece, without compromise, without gimmicks.

The 8Js logo confirms the innovative clothing company remains the team’s clothing partner of choice. 8Js will provide the team’s official kit whose colours and style will match the race car’s new livery while demonstrating the young brand’s talent for fit, practicality and elegance.

Finally, LEMO Connectors remain official partner of the Renault-e.dams team. LEMO is the acknowledged leader in the design and manufacture of precision custom connection and cable solutions. LEMO’s high quality Push-Pull connectors are found in a variety of challenging application environments including medical, automotive, industrial control, test and measurement, audio-video and telecommunications.