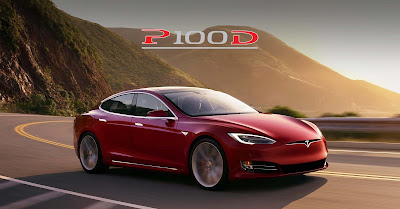 Tesla have announced the Model S P100D with Ludicrous mode claiming it as the third fastest accelerating production car ever produced, with a 0-60 mph time of 2.5* seconds. The only remaining production road cars a Tesla Model S can’t beat are the LaFerrari and Porsche 918 Spyder.

However, both were limited run, million dollar vehicles and cannot be bought new. While those cars are small two seaters with very little luggage space, the pure electric, all-wheel drive Model S P100D has four doors, seats up to 5 adults plus 2 children and has exceptional cargo capacity.

The 100 kWh battery also increases range substantially to an estimated 315 miles on the EPA cycle and 613 km on the EU cycle, making it the first to go beyond 300 miles and the longest range production electric vehicle by far.

The larger battery pack is also available on the Model X, making the world’s quickest SUV even faster. Model X P100D with Ludicrous mode accelerates to 60 mph in 2.9* seconds and travels up to 289 miles EPA estimated and 542 km EU on a single charge. Model X is also a pure electric SUV and can seat up to seven adults.

Model S and Model X are engineered to be the safest cars on the road and to have the highest ratings from NHTSA. Both have access to the Tesla Supercharger network for the freedom to travel long distance for free. And every Tesla will improve over time with free over the air upgrades.

Below is a list of every production car capable of 0-100 km/h in 3 seconds or less. 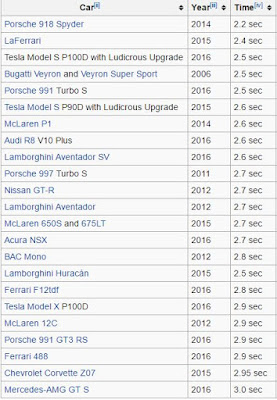 When will Tesla’s Autopilot restore its previous capabilities and add new features that take it closer to self-driving? And how is Hyundai suggesting electric-car buyers should assess models that compete with its new Ioniq Electric? […]

Slate Magazine Tesla recharges the battery-car marketThe Economist (blog)It has not been a good year for the electric–car industry, considering the bankruptcy of little Coda and the all-but-certain collapse of the once-promising Fisker Automotive. Even […]

Nissan has announced a new offer for its 2017 model year LEAF in France; one of which we believe will be similar to all of the Europe in due time. Specifically, that Japanese EV from […]