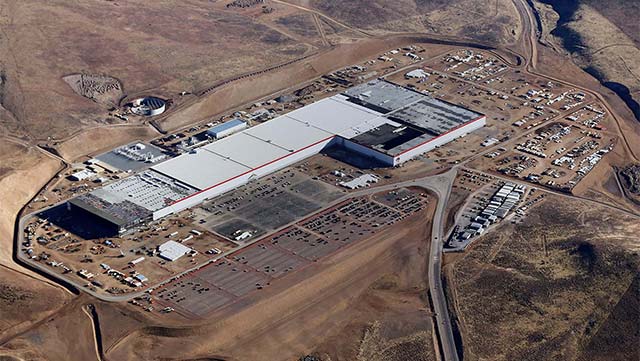 Tesla has started mass production of lithium-ion battery cells at its Gigafactory in Nevada.

The high performance cylindrical “2170 cell”, which will be used in Tesla’s energy storage products and Model 3, was jointly designed and engineered by Tesla and Panasonic to offer the best performance at the lowest production cost in an optimal form factor for both electric vehicles and energy products.

Production of 2170 cells for qualification started in December and today, production begins on cells that will be used in Tesla’s Powerwall 2 and Powerpack 2 energy products. Model 3 cell production will follow in Q2 and by 2018, the Gigafactory will produce 35 GWh/year of lithium-ion battery cells, nearly as much as the rest of the entire world’s battery production combined.

The Gigafactory is being built in phases so that Tesla, Panasonic, and other partners can begin manufacturing immediately inside the finished sections and continue to expand thereafter.

Already, the current structure has a footprint of 1.9 million square feet, which houses 4.9 million square feet of operational space across several floors. And Tesla is still less than 30 percent done. Once complete, Tesla expect the Gigafactory to be the biggest building in the world.

With the Gigafactory online and ramping up production, cost of battery cells will significantly decline due to increasing automation and process design to enhance yield, lowered capital investment per Wh of production, the simple optimization of locating most manufacturing processes under one roof, and economies of scale.

At peak production, the Gigafactory is expected to employ 6,500 workers and create between 20,000 and 30,000 additional jobs in the surrounding regions, Tesla said.

Last month, Malaysia launched in Kuala Lumpur the world’s first all-electric Bus Rapid Transit system. BRT–Sunway Line has over 3 miles of elevated route through the city, and will be operated by 15 electric buses supplied […]

The folks over at DragTimes have appointed themselves with the task of pitting the Tesla Model S P85D against seemingly every high-performance ICE car out there. This matchup see the P85D square off against the […]

oigel.com – #ElectricCar #Cars – New Electric Car Launches, Rumors And News : Here’s everything that you need to know about the upcoming electric cars by all the major brands. Since the introduction of electri… […]