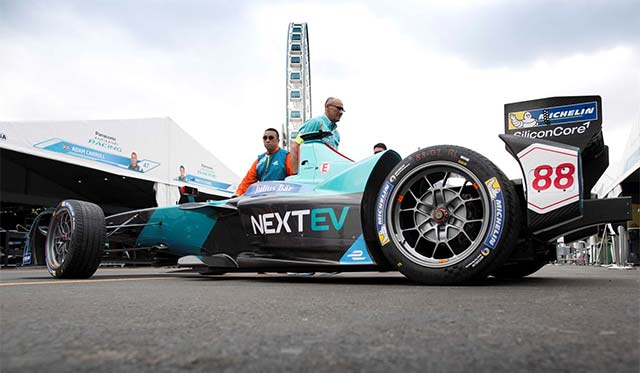 One of the most frequently asked questions about the FIA Formula E Championship is why the series doesn’t race on traditional slick tyres.

And while it is true that if the all-electric street racing series instantly wanted to lower its lap times by a second or two, simply bolting on a set of sticky treadless tyres would get the job done, this would be to miss the point of the philosophy behind the tyre design completely.

An in-depth look at how the Michelin Pilot Sport EV tyre was created can be found here, but in simple layman’s terms the reasons are thus:

– Electric cars demand greater efficiency, whether that’s in terms of minimising wind resistance in the design of the car, or reducing the rolling resistance of the tyres. A low-profile, 18-inch tyre is a more efficient tyre than the standard 13-inch designs used in Formula 1 and other high-powered single-seaters.

– Not since the days of the Morris Minor have road tyres had the type of profile that a current F1 car uses. Formula E tyres are designed to have transferable technology to road tyres.

– Road car drivers do not stop and change tyres when it rains. Because of the treaded design, Formula E drivers don’t need to either.

– Freighting hundreds of wet tyres around the world just in case it rains is an enormous waste of CO2 emissions. It is in the DNA of Formula E to look for the most sustainable solution to each issue we encounter.

For the first two seasons, the Michelin Formula E tyres performed faultlessly. There was not a single failure – the only time a tyre change was required was because of a broken wheel rim – and on the very rare occasions when they were required to perform in the wet, the drivers’ feedback was very positive.

But nothing stands still in motorsport, and behind the scenes the technicians at Michelin were looking at ways of making the tyre even better.

Using the data from two seasons worth of racing, Michelin Motorsport developed the EV2 for the 2016/17 season.

The results are an impressive 16 per cent reduction in rolling resistance. In simple terms, this equates to an energy saving that would allow each driver to go for one lap longer while using the same amount of energy (regardless of any of the other developments that have been made to the cars).

Michelin’s Formula E programme manager Serge Grisin said: “Our work focused on improving energy efficiency. Thanks to the use of new technologies, we have succeeded in reducing rolling resistance while at the same time keeping the same performance levels with regard to the other factors that influence competitiveness.”

As well as being more efficient, the tyres are also lighter, with a saving of 1.1kg per tyre at the front, and 1.4kg per tyre at the wider rears. This adds up to 5kg per car and is an 11 per cent reduction in overall weight. Multiply this across the 40 cars that take part in each race and the reduction in the weight of the tyres being transported to races over the course of the season is 2500kg. This makes for a huge reduction in C02 emissions.

Because the tyres are lighter, it means they are made up of fewer raw materials, so there is an additional environmental benefit too.

Pascal Couasnon, Director of Michelin Motorsport said: “Formula E is a discipline where success is dependent on the drivers ability to regenerate energy and store it in the cars’ batteries, so clearly the energy efficiency of the tyres is a crucial factor. The Season 3 generation of cars will consequently benefit from extended range and no doubt enhanced performance.”

A quick look at Formula E Powertrains for season 3 [VIDEO]

Racing technology has come a long way in Formula E over the past 2 years. With the manufacturers now developing their own powertrains, find out who is using what and how the technology has developed […]

In anticipation of the launch of Formula E’s third season, beginning 9 October in Hong Kong, DS Virgin Racing has released a thrilling video to unveil its Season 3 livery. Shot over 10 hours in […]

It’s been seven long weeks since the second season of the FIA Formula E Championship was decided in dramatic fashion at the Visa London ePrix. Although there’s been no public running since then, in private […]